I’ve been taking some time to reflect in advance of next month’s Genius Catalyst Program on the nature of the intelligence that in my work is often called “Mind”, “Universal Mind”, or more colloquially “the wisdom within”.

As is often the case when attempting to describe something that is fundamentally beyond words, I was reminded of the story of the blind men and the elephant.

While originally both a Hindu and Buddhist parable, the version I grew up with was written by the poet John Godfrey Saxe:

IT was six men of Indostan
To learning much inclined,
Who went to see the Elephant
(Though all of them were blind),
That each by observation
Might satisfy his mind.

The First approached the Elephant,
And happening to fall
Against his broad and sturdy side,
At once began to bawl:
“God bless me!—but the Elephant
Is very like a wall!”

The Second, feeling of the tusk,
Cried: “Ho!—what have we here
So very round and smooth and sharp?
To me ‘t is mighty clear
This wonder of an Elephant
Is very like a spear!”

The Third approached the animal,
And happening to take
The squirming trunk within his hands,
Thus boldly up and spake:

The Fourth reached out his eager hand,
And felt about the knee.
“What most this wondrous beast is like
Is mighty plain,” quoth he;
“‘T is clear enough the Elephant
Is very like a tree!”

The Fifth, who chanced to touch the ear,
Said: “E’en the blindest man
Can tell what this resembles most;
Deny the fact who can,
This marvel of an Elephant
Is very like a fan!”

The Sixth no sooner had begun
About the beast to grope,
Than, seizing on the swinging tail
That fell within his scope,
“I see,” quoth he, “the Elephant
Is very like a rope!”

And so these men of Indostan
Disputed loud and long,
Each in his own opinion
Exceeding stiff and strong,
Though each was partly in the right,
And all were in the wrong!

So, oft in theologic wars
The disputants, I ween,
Rail on in utter ignorance
Of what each other mean,
And prate about an Elephant
Not one of them has seen!

So in today’s blog, I’m going to share six aspects of the universal intelligence we most often describe as “genius”. None of them will sum up the nature of this invisible force, but taken together, they’ll hopefully give a broader sense of both what genius is and how it is already at work in our lives, regardless of what we do…

One of the reasons, or so it seems to me, that people struggle to see the deeper intelligence at work in their own lives is that they attempt to distinguish their personal genius from the universal intelligence behind life. This attempt to claim genius as a personal attribute that some people have and others don’t creates a link to our own egos that makes it virtually impossible to see the subject clean.

Here’s how the mystic Syd Banks wrote about it in The Missing Link:

An important thing to realize is that Universal Mind and personal mind are not two minds thinking differently, but two ways of using the same mind.

In this sense, what we describe as “personal genius” in ourselves or others is simply a description of what happens when we align our personal minds with this impersonal power.

Almost everyone I have ever worked who is considered successful works in an arena where this deeper impersonal intelligence comes through “clean”. That is, for whatever reason, when they write, or politic, or play guitar, or parent, or lead, they are able to get their personal thinking out of the way enough to let something deeper come through.

For many years, this fact led me to the conclusion that we all have a genius for some things but not others. I spent a number of years trying to design my life around that conclusion, limiting the amount of time I spent doing what I was just OK at to give myself more time “living my genius”.

Rather than make my life a more expansive place, attempting to only do what I thought I had a genius for shrunk my world to the point where one of my coaches pointed out what I had inadvertently created: a masterpiece of a life on a postage stamp of possibility.

In the areas I had declared weren’t part of my genius I barely attempted anything and what little I tried was distinctly half-hearted. In the areas I thought of as being in my “zone of genius”, I let loose, throwing myself in and allowing the unseen force to take over.

When I began to throw myself into things I thought weren’t “my thing”, to my surprise I began to experience flow, inspiration, and an ability to create way beyond my typical capacity.

One of the ways I often describe genius is as “a real-time, responsive intelligence”. Real-time, in that it turns up most readily in the moment that it is needed; responsive, in the sense that it turns up in the form that is most relevant to what’s needed most.

This is why throwing yourself into things that seem impossible or beyond your capabilities so often brings more out of us than trying to be “realistic” in the way we set goals and live our lives.

Calling forth the deeper MInd, in this sense, is like working out the body. The more demands you put on it, the more it is able to deliver.

Which points us to another, related aspect of genius…

I used to have absolute clarity about what to do about once every three years. I knew to move to London; I knew to marry my wife; I knew to start my business and I knew when to end it and start a new one. I loved those moments of knowing because life seemed so easy when I knew what to do (no matter how disruptive that knowing might have looked on the outside). The problem was, they came so rarely I didn’t rely on them, looking instead to my intellect, memory, and predictive imagination to attempt to navigate my life.

What I have come to see is this:

Genius is 100% reliable, but the form it will take is 98% unpredictable.

For the next few days, notice where this innate intelligence (i.e. Genius) is already at work in your own life – how often just the right thing occurs to you at just the right time for it to occur.

What would it be like if you began to rely on it to guide you? How much easier would life be if you didn’t need to be in charge of keeping yourself on track from day to day and moment to moment?

The word “genius” is often linked to the idea of “IQ”. But IQ tests measure what I would call intellect, not intelligence. Intellect is our brain’s capacity to filter through everything it’s already learned and make helpful connections. But that capacity is limited by what’s in the database. (If you’ve ever used your computer’s search function to search offline, you’ll know that a lot less things come up then when you search online.)

By way of analogy, I recently noticed myself trying to plug something in behind a chest of drawers, doing my best to feel the socket so I could maneuver the plug into it. Eventually, it occurred to me that if I just moved the chest of drawers so I could see what I was doing, it would be a whole lot easier.

The reason we often find it difficult to get new insights into things is that we are wading through the furniture of the known – the database of the intellect – in hopes of plugging in to the infinite creative potential of innate intelligence.

When we put aside our habitual thinking and attempts to figure things out, it’s like moving the furniture before plugging something in. It may still take a bit of time, but fresh new thinking is inevitable.

In The Space Within, I share a fairly obscure but to my mind apt metaphor for what Genius is and where it comes from:

Imagine that from the moment we’re born, every one of us is given our own magical cow as a companion. Any time we need nourishment, we need only look to the cow and it will give us fresh milk. Being a magical cow, it’s milk is healing, delicious, and nourishing, giving even the most lactose-intolerant among us exactly what we need to function beautifully moment by moment.

Now imagine that over time we forget about our magical bovine companion but never lose our craving for its milk. We seek to slake our thirst from the cows of those around us, even arguing with others about where to find the ‘one true cow’ that will deliver unto us the freshest, most nourishing milk.

We might even be tempted to go down to the village every Sunday and stockpile a week’s supply of our favorite brand, so that if we find ourselves in need of extra nourishment in the midst of our day-to-day life, we always have some to hand. Yet this bottled milk rarely refreshes us in the way that it did when we first drank it, and no matter how wonderful the farmer whose cow gave us the milk, it never quite delivers the magical quality of perfect nourishment that our own cow’s fresh milk contains.

Some of us might even carry around bottles of the milk that had nourished us as children, dismissing its sour tastes as a function of our own unworthy taste buds and not as a function of what happens to all milk when it’s been away from its source for too long.

Finally, imagine waking up one morning and remembering that having a magical cow as a companion is your birthright as a human being – a gift from the divine to remind you of your spiritual nature, even as you live your one and only life fully in the world. You look into its soft eyes and realize it has never left you, and you feel deep gratitude for its presence in your life.

Sure, you might still enjoy tasting the milk from other cows, but you cease to look to it for nourishment. Carrying around old milk looks less and less of a good idea, and once again you come to rely on your own magical companion as the source of exactly what you need exactly when you need it…

When we look to what is fresh in the moment, we touch the aliveness at the heart of who and what we are.

And the more we allow that living energy of Genius to fill us up and move us forward, the more beautifully our lives unfold.

Are you or is someone you love a commitment-phobe? With Valentine?s Day just around the corner, listen in as Michael explores what stops people from committing and teaches you what you can do to make commitment fun.

What does the word ‘genius’ mean to you? Join Michael live to learn how to go beyond your intellect and wake up to the deeper power inside you!

Want to come alive to the infinite creative potential inside you? Listen live as Michael shares the unbound and unconditional nature of the wisdom within!

In order to get new thinking about your life, it’s helpful to take a fresh look at what you think you already know. Listen as Michael explores the secrets of greater mental freedom and clarity! 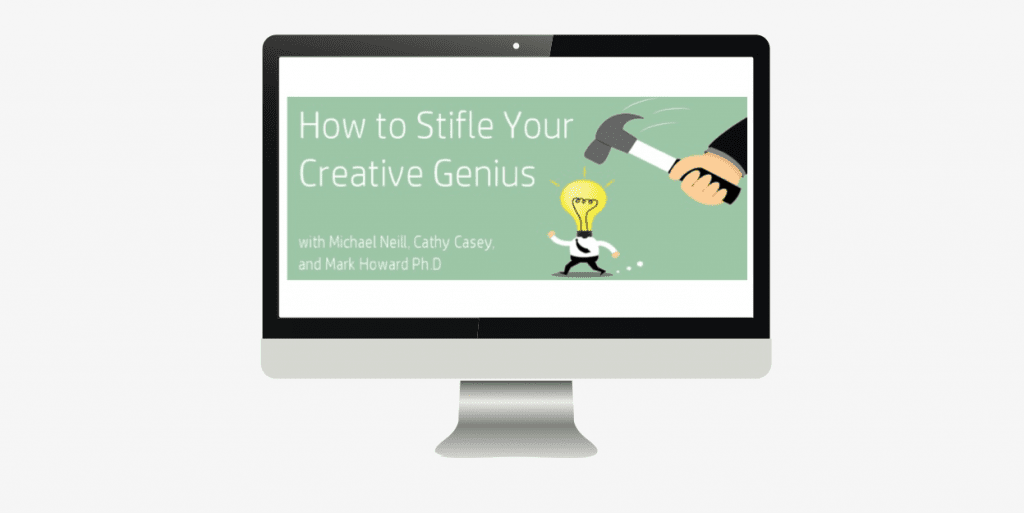 If you’ve ever been stuck in your head or in your life, chances are you’re the innocent victim of a simple misunderstanding about how the mind works. Join internationally renowned teachers Michael Neill, Cathy Casey, and Mark Howard PhD for an enjoyable exploration of the nature of creativity and the source of creative genius.